I've been slowly creating an image of a Sandcastle in Paradise using Photoshop CC.. I started with a landscape picture of a favorite beach on Molokai from our honeymoon... The beach image had already been edited, with stormclouds, a rainbow and more for my landscape photo gallery a long time ago. The Sandcastle was another story. I had several different beach images behind it to get the composition I currently have. For a while I was using a secret beach up near Point Reyes, though it distracted from the view of the sandcastle. On to the sand castle. I started with photos of actual sandcastles made by my husband, son and some friends. The lighting was harsh, mostly wrong and the detail, well - skill level of our sandcastles was not exactly the dream fantasy castle that I had in my mind's eye. Then I moved on to some photographs I had taken of one of those silly sand-castle sculpted sand figurines that you can buy in all the beach touristy shops.  The castle was an unusual shade of aqua, as it was supposed to decorate someone's beach themed house or bathroom I imagine.

So I added in a photograph of the sand sculpted castle. I flipped it over and warped it until I got the composition right on the castle. Then I went in with Photoshop's brush set and added some highlights and sand using custom brushes... Initially, I was working at a view of 30% in Photoshop, on an art canvas about 18x24 - which means I was working with broad lines and strokes but not super detail. Excited by my new idea of a dreamy sand castle I thought it was done. I printed it out and put it next to some other art, and hung it on the fridge for a day or two. I kept walking by it thinking, something is off, something isn't done. I asked my husbnad and my four year old, who are not exactly art critics - who really had nothing constructive. finally I got some worthwhile feedback, and it was about the details. As you know, the devil and the beauty, is always in the details when it comes to images which strike or capture. So, while I spend alot of time taking photos, editing photos, I rarely spend hours and hours editing down to the pixel on a giant image zoomed in at 200%, WITH A PAINTBRUSH. This image will be the first one in a long time that will have more brush-strokes and painting, than photographs.

My typical image is usually made up of 50-100 photographs - this one is made up, or will be made up of 100-1000 brushstrokes of varying degrees with sand textures in an effort to "paint" a realistic sandcastle... I started actually by trying to go into Corel Painter and playing with the sponge brushes. Honestly, I kept getting frustrated mostly because the workflow is so different than Photoshop, which I've been using since 1998... I even downloaded some amazing sandbrush presets from someone that I found on the internet for Painter. I couldn't adjust them, and thye didn't work right, so I ended back in Photoshop, apparently my medium of choice, for even now painting. Painting in Photoshop using the brushes  takes a little bit of playing around with the settings to get the correct  / desired effect.. I started grabbing small pieces of sand castles that had been built, instead of whole castle photographs, and painting over them to mix with the painted details. This takes hours and hours to paint little grains of sand in Photoshop! Here is a screen shot of my work in progress, which now has many many more hours to go, until the detail is accurate. I tell myself it will all be worth the effort when I print it into a large size canvas and the detail beckons you further into the picture.... :) 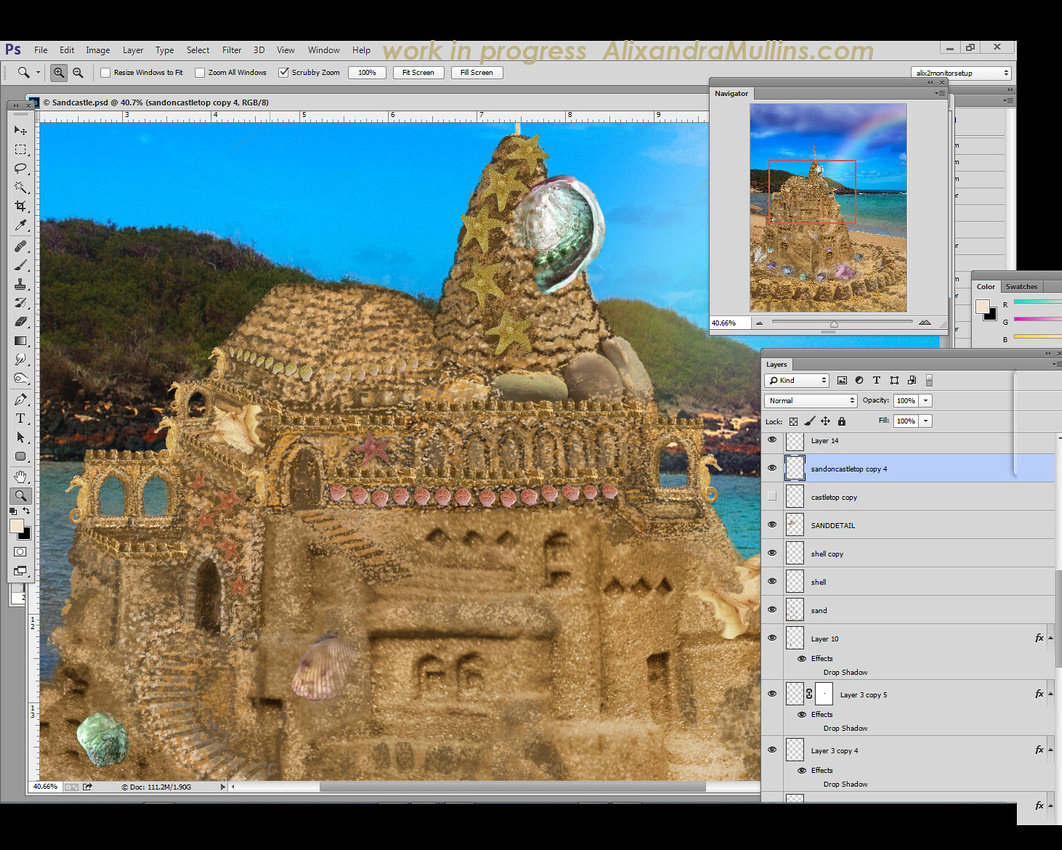